Share23
Pin6
Tweet
Email
Share
Reddit
29 Shares
Thanks so much for joining us for our Encouragement for Imperfect Moms Series (formerly Imperfect Mom Confessional)! We hope you'll be blessed, encouraged, challenged and comforted all at once. Please let us know if you need prayer - we'd love to pray for you!

We had a little password in our family which I would often ask for as any of our kids were coming into the house.   And they all knew what it was – Sausages.  I would then repeat it in a silly bass voice and kind of draw out the word

A silly little thing that as the kids got older they would frown at.

There would be no-one else around so why would they be embarrassed by it?

They also frowned at the fact that whenever I would grill sausages I would burn them.
Well their dad and them would say I had burned them but I would just cut off the really hard bits and eat away.

I have to tell the truth – I had burned them!

[Tweet “I have to tell the truth – I had burned them! @sandrasark #imperfectmom”]

I burned them because I could never have enough patience to wait for them to cook nicely but always went off unto the computer or to read a book and then – well – they just got burned because I would forget about them.

I tried baking them in the oven too but even then I would forget about them and burn them. 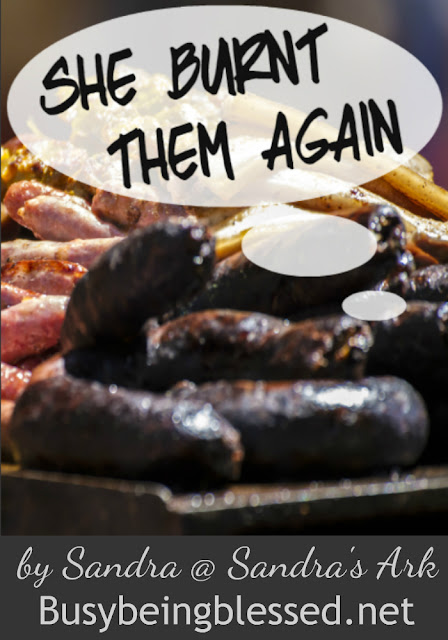 I’m always looking for shortcuts to things because I don’t have enough patience, or because I get bored doing any one thing for too long.

[Tweet “I don’t have enough patience, or I get bored @sandrasark #imperfectmom”]

I love to make nice meals if there is someone else around to help or talk to me while I do it but when I’m preparing & cooking on my own – no! I want the quickest way to provide the meals.

I have been known to make easier, quicker versions of meals like the 10 Minute Chicken Korma
and sometimes I have even made the desserts so easy that they hardly even really qualify as desserts such as my Ginger & Pineapple Log (Super Short Version) which basically is not a log!

I promise you I really do know that microwaves are not just for reheating coffee  –  oh yes this is another one of my little quirks or one of the “Oh No Mum!” things that the kids would frown at but I see nothing wrong with reheating my mug of coffee two or three times during the day. 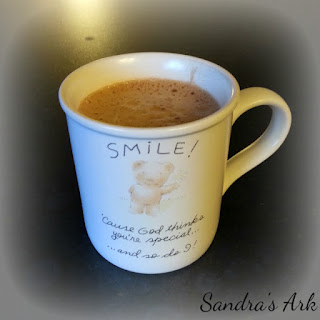 And then we come to the big, big, bad thing that I did to our middle child:

because he had started university there.

I know this is something that people outside the family found more strange than the family did.  I felt I could sense people saying:  “What kind of a mother would leave her child on his own?”

[Tweet “What kind of a mother would leave her child on his own? @sandrasark #imperfectmom”]

So there you have it. I am not perfect and never have been a perfect mother.
I would rather read a book than do the ironing.
I would rather do a word puzzle than clean the oven.
I would rather write my blog than hoover the house.
I would rather write a list than actually do the things on the list.
I would rather go sit and watch a dvd than finish up the mess I made because I had started to tidy the study & boy can I make a mess while trying to organise things.
But Mostly
I would rather have a coffee and sit & chat with my now grown up kids about how
Jesus has worked in our lives.
He has redeemed us, healed us, kept us safe,
answered our prayers, never left us alone, helped us in everything
[Tweet “He has redeemed us, healed us, kept us safe, @sandrasark #imperfectmom”]
and
we are all thankful that He is still doing so
no matter what country we may have lived in
or are in at the moment
because
He is the Perfect One.
You see I can’t be perfect because I am human but thankfully with Jesus I have the help to do all the things He has planned for me.
If you like you can visit my blog and in the about me section you can see the poor hubby and the kids who had to put up with me not being a perfect mum – oh and the middle child is the tallest one with his arms around us all in the snow.

About the Author: Sandra Black is a housewife currently living in Banbridge in the east of Northern Ireland, UK, who has also lived in Delaware in the USA for 3 years and Tervuren (a village east of Brussels) in Belgium for over 6 years.
She has been married for 38 years to Fred who is very loving, patient & kind and she is also the mother of 3 grown up kids who laugh about how their mother lives on the computer.
She enjoys reading, co-ordinating the Kids Work at her Church, experimenting with graphics and blogging at Sandra’s Ark. Find her on Google+, Pinterest & Twitter.